March 18th 2021 saw the government announce that with immediate effect there were to be some significant changes to the Plug-In grants available for BEVs in the consumer and commercial markets. This move was entirely unexpected and controversial in that it is not supportive of the Road to 2030 initiative and the ban of the sale of pure ICE cars that the government has been talking about and promoting so heavily in recent months and weeks. To be clear, the financial support has now dropped from £3,000 per car to £2,500 and whilst any drop-in support is unwelcome the uncomfortable part of this change in policy is that the Cost New cap for the support has been reduced from £50,000 per car to £35,000 per car. It is believed that there was no industry consultation or warning of these changes coming into place.

At a time when the cost of BEVs is much higher than ICE cars this removal of support has a significant impact on the availability of the grant for some mainstream BEV models. The following vehicle model ranges will be affected: 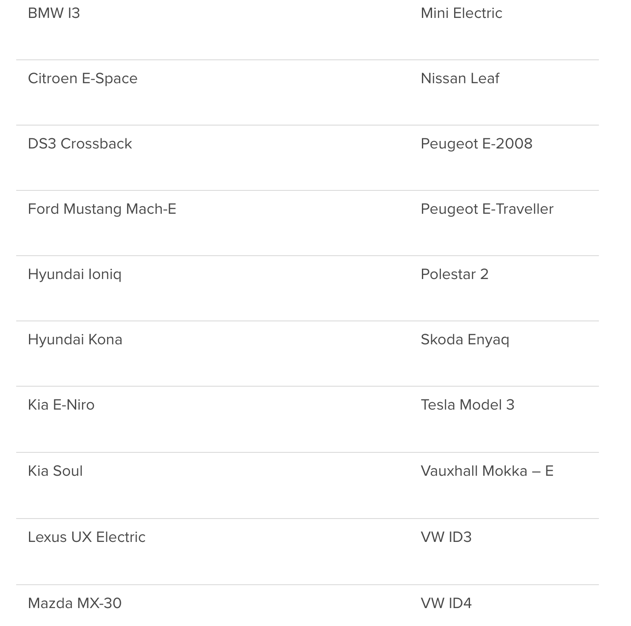 Whilst not all models in these ranges will necessarily be impacted, this is quite an extensive list and this action has not rewarded those manufacturers that have been preparing new products for the market in predetermined price ranges. It is also worth highlighting the impact of the change in the level of the grant in relation to the cost of ownership of the car. Most private cars these days are financed with in excess of 92% of new cars registered being the subject of some form of finance agreement according to the FLA. Broadly speaking the removal of this grant will increase the total cost financed by £2,500 and that would equate to around £70 a month higher payment for a £35,000 car on a 4-year HP agreement with no deposit.

However, there are some counter arguments and considerations to what has happened and probably the most important point to address is the immediacy of the announcement. The government has been in an invidious position over the last year as a direct result of the COVID pandemic. Without specific detail, expenditure and borrowing has had to sky-rocket to give the country and population as much support as possible. As we begin to come to the end of the pandemic the government has no choice but to try and find ways to begin to pay back the debt. This is one of those ways. As a country and individuals, did we not realise that we would have to pay this borrowed money back?

Introduction of the Plug-In grant changes overnight will have stopped the immediate registration of BEV’s in a bid to grab financial support from the government where there is no actual demand for the cars. This was last seen when the grant was adjusted in 2018 and there was a significant increase in the volume of pre-registered BEV’s that hit the used car market during the final weeks of the grant availability. Therefore, in making this change overnight, the government has saved money and inadvertently supported used BEV residual values by averting an unnecessary increase in unwanted cars in the used market.

In addition, the change in the focus of the Plug-In grant support may well be more strategic than it seems at first sight. One of the key industry issues is the speed of the uptake of BEVs with consumers, who are often put off by the high cost of the car itself and the lack of transparency and understanding of the benefits of switching to a BEV. The low levels of new car sales directly impact the volumes of cars in the used car market too as demonstrated in the chart below: –

New car data from the SMMT has BEV registrations for the year running at 6.9% of the whole market for 2021 year to date, up 4 percentage points on the previous year, the used car market shows a total volume of live BEV retail advert listings at just 0.9% of the total market in February 2021 up from 0.5% 12 months ago. This rate of growth is not fast enough at this point and there is an argument that incentivisation of lower cost new BEVs, will help move the needle in the right direction and at the same time help focus OEM attention on producing cost effective cars at the cheaper end of the market where there is greater volume and scale overall.

In summary, whilst the changes to the Plug-In Grant are certainly unwelcome as a headline, there are alternative angles to take into consideration. Furthermore, as an industry we should expect the government to be looking much more closely at the type of support and incentivisation that it gives to aid and support the transition from the ICE to BEVs and onwards to complete ZEV coverage. There are always different ways to achieve a goal and the question is which route will be most beneficial to the consumer, supportive of the OEMs and fair to the automotive industry as a whole.

Back to blogs
Previous
Next

Want to find out more?